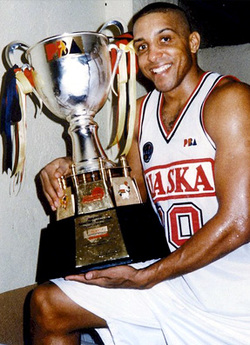 Chambers played at Cal Poly from 1985-87 after two seasons at Cuesta College. He holds the school record for free throw attempts in a season with 214 and scored 531 points (No. 6 all-time for a single season at Cal Poly) as a senior, averaging 18.3 points per game.

He also grabbed 6.4 rebounds a contest, leading the Mustangs to a share of the California Collegiate Athletic Association title and a 19-10 overall record.

Chambers also averaged 15.0 points and 5.9 rebounds as a junior and led the Mustangs in assists as well with 119 (3.8 avg.) as the Mustangs again won the CCAA title.

At Cuesta, Chambers led his team to a 20-11 record as a sophomore, averaging 22.8 points and sinking 64.7 percent of his field goal attempts.

He is a 1983 graduate of Highlands High School near Sacramento, leading his senior-year squad to a 33-1 record and the CIF-Sac-Joaquin Section title.

Chambers played professionally for 14 seasons in the Philippines with stints in Japan, Venezuela, Malaysia, Australia, Canada, Indonesia and Hong Kong. He led his team to seven championships and was named "Best American Player" in 1996. His Philippines jersey No. 20 was retired in 2002.

Chambers currently is the girls varsity basketball coach at Antelope High and coaches and is director of JBS club teams. He also hosts two national certified basketball showcases each year in Sacramento and is the owner of Just Believe Sports uniform manufacturing company.

With a love of sport and a passion for basketball, Coach David strives for success.  With over 25 years of High School coaching experience, Coach David brings JBS his guidance and knowledge in working with developing our young players.

For a decade he has devoted time and talent to JBS and appreciates the vision of the organization, as together we support all players’ accomplishments.

For the past 4 years he has been the Jr. Varsity Coach at Antelope High School and for 18 years prior to that at Highlands High School.

Coach David's enthusiasm for the game and his dedication to JBS is apparent as he aims to guide each and every young lady to success. 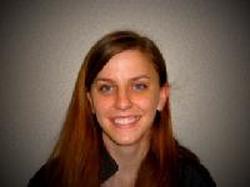 JBS has seen Michelle grow as a person a player and as a role model for young women in the sport of basketball.  Coach Sean is proud to say he coached Michelle as a young player in the JBS club program and Highlands High School.

Upon graduating from Highlands High School in 2004, Michelle then went on to play for Notre Dame de Namur, in Belmont California.  Furthering her education she transferred to CSU Sacramento to pursue a degree in kinesiology where she graduated in 2010.

Juggling a full time career as an orthopedic clinical research coordinator for the Shriners Hospital for Children, and coaching basketball to freshman girls at Antelope High school, depicts Michelle’s commitment and dedication to club ball.

JBS is thrilled to have Michelle’s consistent positive influence and drive for excellence in our growing and successful club.

JBS is fortunate to have this seasoned and experience coach and player of 20 years be a part of their club.

Enjoying all levels of competitive basketball, John began his enthusiasm for the sport at John F. Kennedy and Valley High schools.  He then went on and played in numerous semi-professional basketball leagues and tournaments.  His many coaching credits include: Sheldon High School Women's Basketball, T.R. Smedberg Middle School Boys and Girls clubs, Nike Elite High School All-Star summer league and girls 2014 Sacramento Believers in which he is currently involved.

Alongside his commitment to JBS for the past 3 years, he’s enjoying his fourth year as the assistant basketball coach at Sheldon high school.

John’s varied experience extends to include being coached and trained under the tutelage of Job Hung- Taiwanese National Player/Coach.  Not only does Coach John bring years of experience to JBS, he is considered ‘swag’ with the kids, making each and every game and practice enjoyed by his young players.

Coach Al remembers loving the game of basketball growing up, and his passion for the game continues today.

He began coaching youth ball to boys and girls in the Bay Area 11 years ago.  During that time he has been coaching girls for a variety of teams, which include AAU traveling girl’s teams, freshman women’s teams at Sheldon High School and is currently the head women’s varsity coach at Sheldon High.

Coach Al joined JBS 4 years ago and has made a tremendous contribution to the club bringing with him a variety of skills and knowledge that he has gained over years of coaching.  His calm demeanor and patience is an attribute that is respected by all players and parents.  He enjoys developing and teaching the game year round as he sees great potential in the young athletes JBS is producing.

He looks forward to another tremendous season with the club and takes great pleasure in seeing JBS players flourish as they share his mutual love of the game.

Coach Allison grew up in California and attended Justin-Siena High School in Napa where she held four league titles and was the 3-time section playoff runner-up. Upon graduating in 1994 she went onto Solano JC where she was the starting point guard in back-to-back, "State Final Four" appearances under the leadership of Coach & Mentor, Kim Mitchell Gervasoni for two years.

In 1997 Coach Allison was awarded the 2-time Academic All-American and obtained an Associates Degree in Psychology & Liberal Arts. She then attended UC DAVIS
to further her education garnering a Bachelor of Science Degree- Human Development. Previously a stay-at-home mom, she has returned to her teaching career in Health Science at Vanden High School.

Coach Allison married Jake Johnson III in 2000. Coach Jake not only dedicates time to JBS, for 15 years he’s served as a Correctional Officer in Solano County and has over 20 years of experience in the Criminal Justice Field. He begins his 12th season (10th Varsity) as assistant coach for Allison at his alma mater.

The Johnson's carry an overall record of 225-41 in their 9 varsity seasons at Vanden High School. They are proud to say that the Lady Vikings have won 13 consecutive league titles, 4 consecutive appearances in Nor-Cal Playoffs, and set a new win streak this season with 18 consecutive wins. The Johnson's have 4 kids who love being fully involved in the teams that their parents coach. With a mutual mantra they believe that through basketball relationships are built, character is formed, and life lessons are learned.